Reece James will miss World Cup in Qatar due to injury 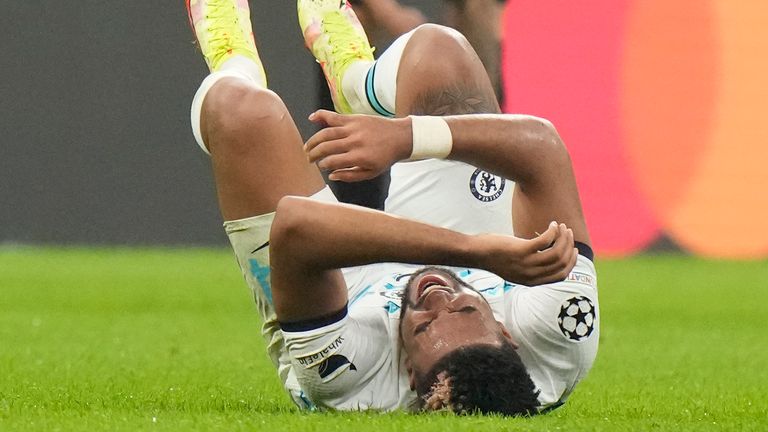 Reece James hasn’t recovered sufficiently from the knee injury he picked up against AC Milan last month playing for Chelsea; Gareth Southgate spoke with the right-back on Tuesday; Southgate did not want to risk taking him in his 26-man squad which he will announce on Thursday at 2pm

Reece James will miss the World Cup in Qatar because of injury.

After discussions with Gareth Southgate on Tuesday, it was decided the Chelsea full-back has not recovered sufficiently from the knee injury he picked up against AC Milan last month.

James flew to Dubai to undergo an intensive rehabilitation programme in an attempt to be fit for Qatar, and was even doing some tentative running at Chelsea’s Cobham training ground in recent days.

However, with injury concerns to another key England right-back – Kyle Walker – and to midfielder Kalvin Phillips, Southgate has taken the tough decision to tell James that he cannot risk including him in his 26-man squad that will be announced on Thursday.

James revealed he was willing to take the “risk” of making the World Cup squad which he never gave up hope of reaching as he “worked harder than” ever to return to fitness.

“Devastated,” James wrote on Twitter. “The minute I injured my knee, I knew the turnaround to make the World Cup would be tight, but I always felt it was possible.

“I’ve worked harder than I ever thought I could to give myself the best chance of going and truly believed I could help the team. I appreciate there was risk on both sides but it was one I was willing to take.

“Good luck to the boys. I’ll be back soon. Stay safe and sending love.”

“There was hope, certainly from the player and his family and everyone around Chelsea that he could play some part in the World Cup, but he’s lost his race.

“I think the key issue here is the number of other injuries that Gareth Southgate is dealing with in this England squad.

“But the FA medics as I understand it were told that it would be several weeks before Reece James would be fit to play. He’d then have to build up his match fitness and get back into the squad.

“Southgate decided that while he could still play a part in the latter stages of the tournament, he just couldn’t risk it, he couldn’t afford to take him.

“So he called Reece James yesterday to deliver the bad news and Reece James and his family are understandably devastated by it because he was England’s first-choice right-back before this injury he suffered in the Champions League against AC Milan last month.”

Morris: The right decision by Southgate and for James

“I messaged Reece instantly when it first happened and said, ‘Make sure you don’t come back too early just to make yourself fit for the World Cup, you’ve got another 15 years ahead of you’.

“He’ll have opportunities to play in other tournaments. When someone is so young and they’ve got the rest of their career ahead of them, you’ve got to make sure they don’t cause themselves further damage for a tournament that comes too quickly.

“I’m gutted for him because I think he starts every game for England if he was fit. It looks like the right thing for him from a fitness aspect and for Chelsea and England long-term.”

“James Maddison, Marcus Rashford and Harry Maguire will make the headlines when Gareth Southgate names his World Cup squad on Thursday – whether they’re included on the list or not.

“While I expect the Manchester United duo to both be given seats on the plane to Qatar, Maddison’s selection is still very much 50-50.

“Southgate is still sweating on a number of key players who are racing to get fit enough for selection. Kalvin Phillips and Kyle Walker are in the middle of intensive rehabilitation programmes, and also at the centre of an anxious wait.

“This will be the first World Cup where nations are allowed to pick 26 players for the tournament, after new rules introduced by FIFA, and that gives the England boss a little more wriggle room.

“It means Southgate can consider players who might not be fully fit as well as those who can be used as impact substitutes, overcoming some of the limitations posed by traditional 23-man squads. Southgate is no fan of the bigger squads, though he did work with a 26-strong party for last summer’s Euros.

“Nations are allowed to make squad alterations at any stage up to 24 hours before their first game – in England’s case, that means an ultimate deadline of November 20.”