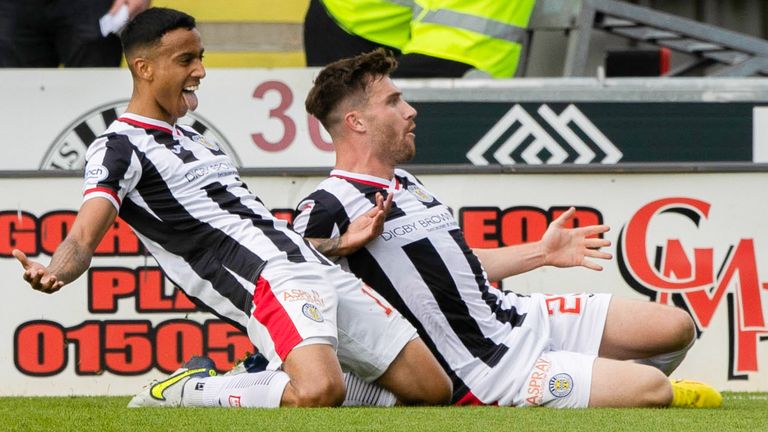 Ross County climbed off the bottom of the cinch Premiership table thanks to a spirited second-half comeback against St Mirren that earned them only their third league win of the season.

Two goals in the first 13 minutes set the tone for an absorbing encounter which the Staggies won 3-2 and where the emphasis was on attacking play.

Jordy Hiwula was poised at the back post to connect with Owura Edwards’ probing cross from the right only for Gogic to get a jump on him at the expense of a corner.

But the opener was delayed only until the 10th minute when Jordan White ran onto a peach of a through pass from Victor Loturi to steer the ball into the net after the defence had been slow to react to the threat.

County led for only three minutes, however. Having won a free-kick on the left of goal when Jack Baldwin fouled Jonah Ayunga 22 yards out, Saints capitalised on the opening when Ryan Strain left Ross Laidlaw clutching thin air with a powerful strike.

But such was the positive nature of the contest that Hiwula forced a save from Trevor Carson just 60 seconds later.

County continued to pose the greater threat but they were forced to revisit their game plan when Baldwin had to be replaced by Keith Watson as a consequence of an earlier knock.

The enforced change did not compromise the home side’s flow and they passed up a chance to regain the lead after 33 minus when White ballooned a lay-off from Yan Dhanda over the bar.

But County were stung in first-half stoppage time when Mark O’Hara headed Ethan Erhahon’s corner against the crossbar and the ball came down on the goal line.

It was unclear initially whether O’Hara’s header had crossed the line or whether Ayunga had got the final touch but TV evidence subsequently confirmed that it was the former’s goal.

Instead of panicking, County stayed patient and reaped the rewards of their approach when they scored twice in the space of five minutes to reclaim the lead.

Jordan Tillson levelled things in the 56th minute when he drove home a left-footed shot from Edwards’ cross to score his first goal on his 92nd appearance for County.

Defender George Harmon, who had been out for close to two months with a hamstring injury, then headed his side in front on the hour mark in only his second full game back after Edwards again supplied the ammunition.