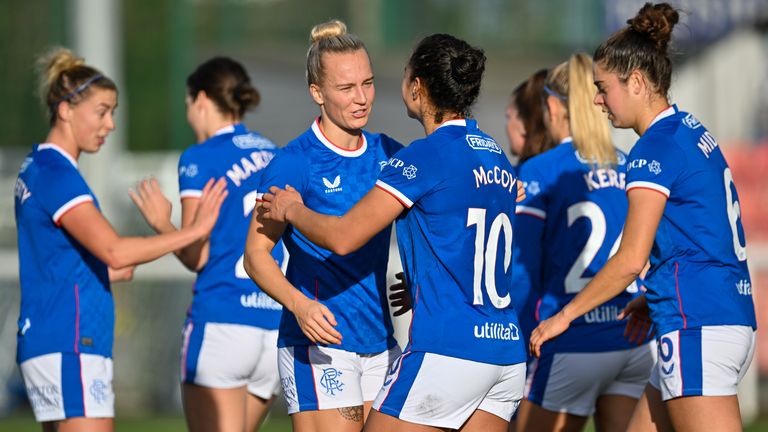 Rangers are into their first-ever Scottish Women’s Premier League Cup final after seeing off Spartans 4-0.

Despite penalty heroics in the last two rounds, the SWPL champions proved to be too tough a test for Spartans who found themselves behind early on.

Malky Thomson’s side – who are yet to concede a goal domestically this season – had Chelsea Cornet to thank for the opener as she chipped home after seven minutes.

Kayla McCoy then got her first goal in the competition this season, slotting home a penalty before half-time.

Rangers continued their goalscoring exploits in the second half with Finland international Jenny Danielson scoring their third after a delightful cross from Brogan Hay.

Lizzie Arnot got in on the act with her ninth goal in all SWPL competitions to round off the win.

Former City forward Krystyna Freda came back to haunt her old side as she scored both goals for Hibs, capitalising on a mistake at the back for her first before doubling their lead with 15 minutes remaining.

The hosts made it a dramatic finish as Mairead Fulton scored to make it 2-1 with six minutes to go but, despite pressure, Hibs held firm.

It is City’s first defeat of the domestic season, as for Hibernian, the Easter Road club are preparing for what will be a 12th final appearance.

The final will take place at Tynecastle Park on Sunday December 11 and will be the first SWPL match to be shown.

“The clubs and players have all spoken very highly of their experiences here, commenting on the incredible atmosphere that is created at Tynecastle which is well-known amongst fans of Scottish football.

“I’m also delighted that this will be the first match broadcast on Sky Sports since the announcement of our record partnership.

“Alongside Sky Sports and the two finalists, we look forward to a historic moment for the girls and women’s game.”

“Tynecastle is known across the country as being one of the top venues for atmosphere and we hope that everyone associated with this match has an experience to remember.

“Sky Sports will provide significant exposure to the women’s game which is paramount to helping it to grow, and we are happy to help play a part in that by hosting this exciting fixture.”