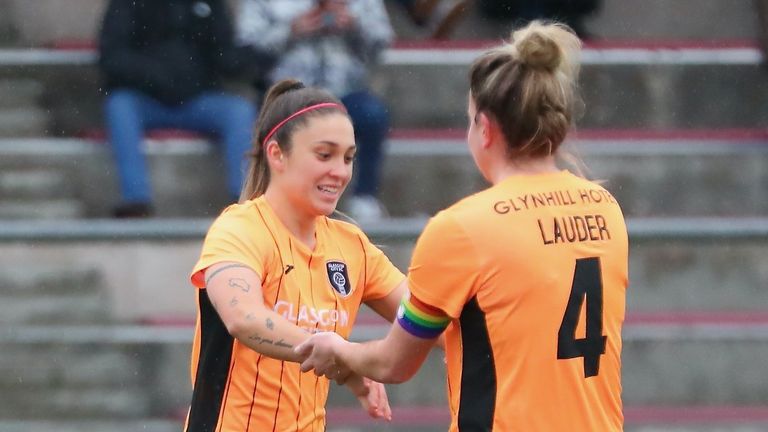 Glasgow City remain five points clear at the top of the SWPL after interim boss Leann Ross led them to an emphatic 6-0 victory over Hamilton.

Priscilla Chinchilla, starting in her first City game since the break, scored two goals inside the first seven minutes to put City in control.

Scotland international Jenna Clark added a further two goals before the break to take her total to five SWPL goals for the season.

Emily Whelan made it 5-0 just two minutes into the second half before Kinga Kozak rounded off the scoring with 89 minutes on the clock.

City are away to Rangers next Sunday in a crucial match in the title race. Hamilton Accies host Dundee United, the two sides separated by just one points towards the bottom of the table.

Celtic returned to goal-scoring form as they thumped Partick Thistle to remain second in the table.

After a disappointing midweek goalless draw with Motherwell, the home side scored with just 14 minutes on the clock to settle any potential nerves. Amy Gallacher put them in full control, scoring both goals to make it 3-0 with 36 minutes played.

The second half saw more of the same with goals from Shen Mengyu, Jacynta, Kelly Clark, and a brace from Chloe Craig all going into the final 10 minutes of the match.

Celtic are still five points behind Glasgow City at the top of the table with a tough away match against Hearts next Sunday. Partick Thistle remain three points clear in the battle for a top-six place.

After holding Celtic at bay for the full match on Wednesday, it took Rangers just two minutes to open the scoring through Tessel Middag. The Gers then doubled their lead with 21 minutes played with Jamaican international, Kayla McCoy, scoring her eighth SWPL goal of the campaign.

Rangers added a further five in the second half, goals from Brogan Hay, Middag, Jenny Danielsson, and Kirsty Howat.

The Broadwood side remain third in the table, two points behind Celtic with a game in hand and host Glasgow City next Sunday. Motherwell will look to bounce back away to Spartans.

Spartans got revenge over their Edinburgh rivals for their Scottish Cup defeat only a fortnight ago, boosting their chances of a top-six finish in the process.

The sides went into the break level at 0-0, before Spartans captain Alana Marshall sparked the game into life just two minutes into the second half. Her rocket was her fourth SWPL goal this season.

The Ainslie Park side extended their lead with just over 10 minutes remaining, substitute Mya Bates with the assist for Hannah Jordan to tap in.

The hosts pulled one back just five minutes later, Nor Mustafa with a wonderful volley from outside the box to give her side hope. However, it was too little too late for the Hibees who fall eight points behind Hearts in fourth.

Hibs travel to face fellow top-six side Partick Thistle next Sunday while Spartans are at home to Motherwell, both sides level on points.

Dundee United moved out of the relegation play-off zone after denying Glasgow Women their first points of the season.

The home side took the lead moments before half-time, Robyn Smith with the goal after Neve Guthrie headed on Leah Sidey’s cross.

United doubled their lead with 69 minutes on the clock through Danni McGinley after a scramble in the box. The goal brings up McGinley’s 50th goal for United in just 56 games.

It looked like United would win with a clean sheet but Glasgow Women pulled a goal back a minute into injury time, leading to a nervy finish. It was too little too late though.

United move up to ninth in the table, two points clear of Aberdeen. They travel to face Hamilton Accies next Sunday, just one point ahead in the table. Glasgow Women welcome Aberdeen to New Tinto Park in what is likely a must-win game.

Hearts extended their unbeaten run to five games and ended the day eight points clear of rivals Hibernian after a narrow win in the north-east. The result drops Aberdeen back down to 11th, in the relegation play-off spot.

In what was a close match, it took the Jambos until the 76th minute to break the deadlock. Emma Brownlie with the all-important goal, whipping her free-kick into the top corner. It’s only her second SWPL goal of the season after opening the scoring against Hibs at Easter Road back in November.

Hearts host Celtic next Sunday, aiming to maintain their unbeaten home record this season. Aberdeen are away to Glasgow Women, knowing a win could put them back up to ninth depending on other results.