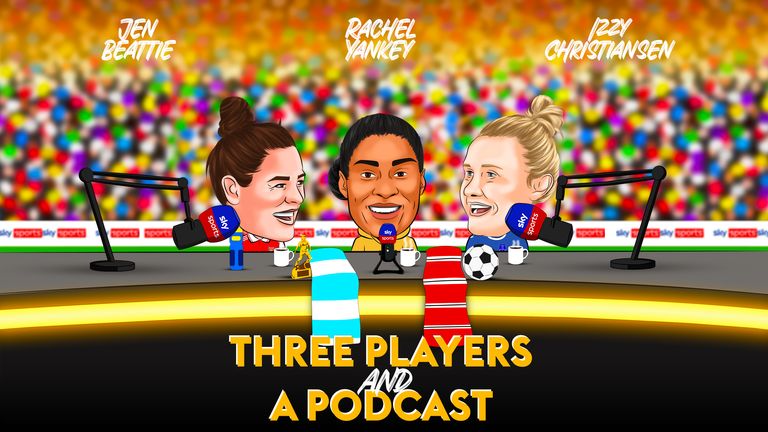 After Manchester United and Aston Villa players were seen taking selfies together ahead of their Old Trafford clash in the WSL, Arsenal’s Jen Beattie, Everton’s Izzy Christiansen and former England international Rachel Yankey debate the balance between being friends and rivals

Arsenal’s Jen Beattie and Everton’s Izzy Christiansen discuss the difficult balance between friendship and rivalry in women’s football with former Lioness Rachel Yankey on Three Players and a Podcast.

The setting for the recent WSL game between Manchester United and Aston Villa was Old Trafford and saw players from both teams socialising ahead of the game at the famous ground.

The new Sky Sports podcast – in which three women’s football stars talk discuss three hot topics – started with the question ‘is there rivalry in the women’s game?’

“I think the game has evolved,” said Everton midfielder Christiansen. “I feel like there’s that mutual professional respect across friends across the league that players probably don’t talk prior to the game but just always catch up after.

“I played against one of my good mates last night, Lucy Staniforth. We were shaking hands at the end of the game, talking about her wedding on the pitch and it was like minus five degrees and she’s getting married in a couple of weeks and we’re talking about arrangements.

“So I think after the game it’s fine, but during the game, there’s a bit of an extra bite there. You want to do one better than them.”

On playing Christiansen, Arsenal defender Beattie denied that she ignored her friend during the recent game between the Gunners and Everton.

“I think one of the best things about sport is the people that you meet and the friendships you make along the way,” said Beattie.

“But I always think it’s quite funny when you’ve got a lead up to the game and if you haven’t spoken to that specific mate in a while, you end up messaging them.

“And then I think it’s hilarious, like who replies and who doesn’t? Because the ones who don’t reply don’t want to speak to you before the game, because they’re just super focused and don’t want to cross anything.

“One of the best things is about friendships in the game and it’s always nice seeing your mates.”

Rachel Yankey was then asked if she has any friends in the game, and whether it was appropriate for players of opposing teams to be taking photos together ahead of a game.

“It’s harsh, isn’t it? No, but I talk to anyone,” admitted the former Arsenal forward. “Would I be out there taking selfies with the opposition? Probably, not.

“I can understand, they were at Old Trafford, but I think they’re going to play at Old Trafford more and more. So hopefully that won’t keep happening.”

Christiansen added: “I think if the women’s game wants to be taken seriously, which it really is now.

“It’s not about the occasions, it’s playing the game, it’s serious business, especially at the top end, a draw that could have been a win can define titles.”

The conversation then turned to swapping shirts, which uncovered an amusing story from Beattie following a match with Spain.

“We played against Spain in a qualifier, I got Alexia Putellas – she had no idea who I was,” said the Scotland international.

“I often wonder sometimes what she did with my shirt. But yeah, obviously an unbelievable player.”

Later, Putellas replied to a Sky Sports WSL tweet with a clip from the latest podcast, saying: “I have absolutely idea who you are ever since you scored in my first CL game and first defeat against Arsenal in 2012.”