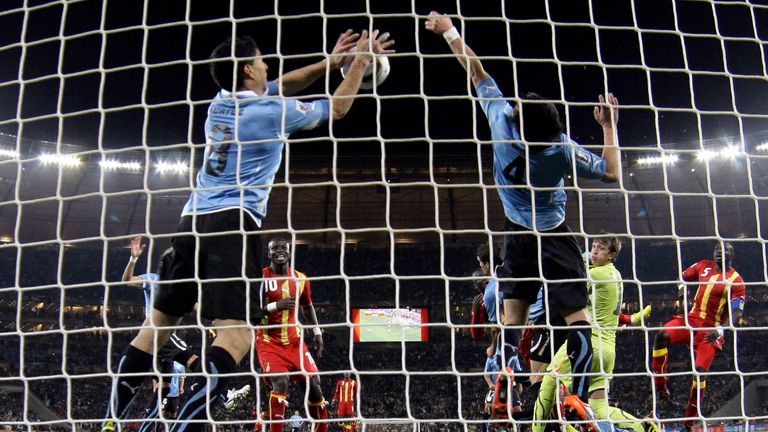 Luis Suarez’s handball for Uruguay cost Ghana a place in the 2010 World Cup semi-finals; the forward punched out a goalbound shot and received a red card but Asamoah Gyan missed his penalty and Ghana went on to lose; Uruguay and Ghana meet again on Friday in the World Cup group stages

Uruguay forward Luis Suarez says he will not apologise for the deliberate handball that knocked Ghana out of the 2010 World Cup – as the two countries prepare to reunite on Friday.

In what was one of the most controversial moments in World Cup history, Suarez denied Ghana a late winner in the World Cup quarter-final 12 years ago by deliberately handling Dominic Adiyah’s shot on the goal line.

Suarez was shown a straight red card for conceding a penalty and then wildly celebrated off the pitch as Asamoah Gyan crashed his spot kick off the bar. Uruguay went on to beat Ghana on penalties to deny the Black Stars the chance of becoming the first African side to reach the last four of the World Cup.

Suarez handled on the line and Asamoah Gyan missed his penalty

Twelve years later, Uruguay and Ghana meet in the group stages on Friday and the winner will knock the other out of the tournament.

Suarez took part in a pre-match press conference on Thursday where one journalist told the striker that sections of the Ghanaian public describe him as “the devil himself” and they look forward to his retirement.

“I did the handball, but the Ghana player missed the penalty, not me,” replied the striker.

“Maybe I would apologise if I did a tackle, injured a player and took a red card. But in this situation… it’s not my fault.

“I didn’t miss the penalty. The player who missed the penalty, he would do the same. It’s not my responsibility how he shot the penalty.”

This is Ghana’s chance for revenge

When Ghana face Uruguay at the Al Janoub Stadium in Al Wakrah, the Black Stars will be aiming for revenge.

Former captain Stephen Appiah recently said in an interview with Al Jazeera: “I get goosebumps when I hear about the 2010 World Cup. It will haunt me for the rest of my life.”

Ghana are back on the global stage in Qatar and rather deliciously, Suarez is still in the Uruguay squad.

It is a chance for a nation to rid themselves of a nightmare that has gripped than for 12 long years.

Speaking before the tournament about the rematch with Suarez, Ghana coach Otto Addo said: “I’m sure that’ll be in the back of the minds of some players because it was a decisive game, not just for Ghana but for Africa as a whole.”

Portugal have already secured their progression with two wins from two but still need a point to be declared group winners.

Ghana are the only remaining rival for top spot, but the Africans could still finish behind both South Korea and Uruguay.