US House passes bill for equal distribution of money in all sports, including soccer 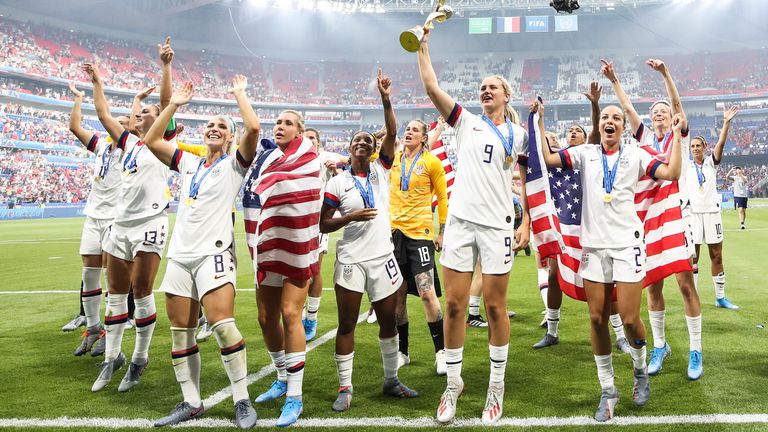 USA government have passed a bill for equal pay in all sports; US men’s and women’s national teams will receive “identical economic terms” as a result of the new collective bargaining agreements; deal comes after end of legal battle between federation and women’s side

The United States government has passed a bill to ensure equal pay between its senior men’s and women’s teams.

In May of this year, US Soccer reached an agreement with both national teams to achieve equal pay between the two sides – including identical pay structures for men and women and equal distribution of World Cup prize money.

The announcement settled a long-running legal battle between US Soccer and the women’s team.

Now, The Equal Pay for Team USA Act, which was passed on Wednesday, will require all athletes representing the United States in global competition to receive equal pay and benefits in their sport, regardless of gender.

The act covers America’s 50-plus national sports and requires the U.S. Olympic and Paralympic Committee to handle oversight. The bill will now be passed to President Joe Biden.

US Soccer President Cindy Parlow Cone said: “By sending this legislation to the President, both houses have sent a clear message that this is the standard for all National Teams in all sports and it underscores the importance of working with our athletes to achieve equal pay including equalizing international prize money.”

How will equal pay in US soccer work?

US Soccer said in May that “first of their kind” collective bargaining agreements (CBAs) were set in place until the end of 2028, to ensure men’s and women’s national team players receive “identical economic terms”.

As part of the CBAs, a portion of the prize money the men’s and women’s sides receive for their participation in World Cups will be pooled and shared on an equal percentage.

For friendly games, men’s and women’s players will be paid the same appearance fees and performance payments, based on the outcome of the match and the rank of the opponent, with identical tiering structures.

As a result of the CBAs, women’s national team players will no longer receive guaranteed salaries, and those who play in the National Women’s Soccer League will cease to have their club salaries paid by US Soccer.

US Soccer has also agreed to share a portion of its broadcast, partner and sponsorship revenue, with a 50/50 split of that share divided equally between the men’s and women’s sides.

Both teams will also be provided with equal quality of venues and pitches, while players will receive a share of the revenue from ticket sales for home games and a bonus for matches that sell out.

Becky Sauerbrunn, the US women’s captain and president of the USWNTPA, said in May: “The accomplishments in this CBA are a testament to the incredible efforts of WNT players on and off the field.

“The gains we have been able to achieve are both because of the strong foundation laid by the generations of WNT players that came before the current team and through our union’s recent collaboration with our counterparts at the USNSTPA and leadership at US Soccer.

“We hope that this agreement and its historic achievements in not only providing for equal pay but also in improving the training and playing environment for national team players will similarly serve as the foundation for continued growth of women’s soccer both in the United States and abroad.”

Walker Zimmerman, the US men’s defender and part of the USNSTPA leadership group, added: “They said equal pay for men and women was not possible, but that did not stop us and we went ahead and achieved it.

“We hope this will awaken others to the need for this type of change and will inspire FIFA and others around the world to move in the same direction.”