There was an average match attendance of 18,544 across all games at the Women’s Euros, with a total of 574,875 spectators; the value of television rights soared by 289 per cent; 84 per cent said their experience watching the tournament has improved their perception of women’s football

A record-breaking 365m people around the globe watched the Women’s Euros in the summer as England lifted the trophy.

UEFA, European football’s governing body, released a report on Tuesday by Ernst and Young revealing the positive impact of the tournament which was held in England.

The tournament ended as it began – with a record-breaking attendance. Wembley was packed with 87,192 spectators for the final between England and Germany, smashing the record set for the opening game as 68,871 people attended the Lionesses’ win over Austria at Old Trafford.

There was an average match attendance of 18,544 across all games, with a total of 574,875 spectators across all fixtures and 85 per cent of those likely to go to women’s football matches again in the future. 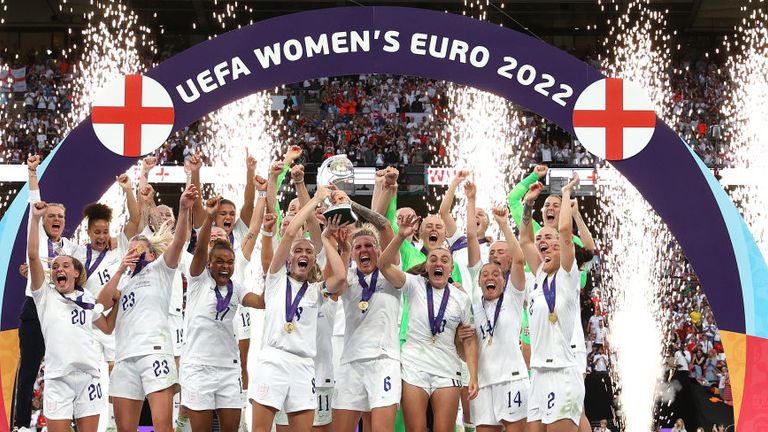 Wembley broke the record attendance for a Women’s Euros match

Eighty-four per cent of spectators said their experience watching the tournament has improved their perception of women’s football with 88 per cent likely to watch a women’s game on TV.

The value of television rights soared by 289 per cent compared to the previous tournament, which boosts the finances of professional women’s teams.

At a grassroots level, more than 416,000 opportunities were created in England across schools, clubs, and the community to engage women and girls in grassroots legacy football activities across the host cities.

The tournament has also inspired more than half of local residents and two in five spectators and volunteers to do more sport and physical activity.

Baroness Sue Campbell, director of women’s football at The FA, said: “Our aim for this tournament was twofold: to deliver a record-breaking tournament and to leave a tangible legacy to grow the women’s game.

“We saw records tumble over the summer and this report not only confirms that, but importantly highlights its incredible short-term legacy on growing the game. Fans have been inspired to play and support, with record attendances witnessed in our domestic leagues and a sold-out Wembley Stadium to look forward to in a few days’ time.

“Our work certainly does not stop here, we will continue to use this tournament to inspire positive change, not only in our host cities, but across the country.”