Lionel Messi says France, Brazil and England are favourites to win in Qatar 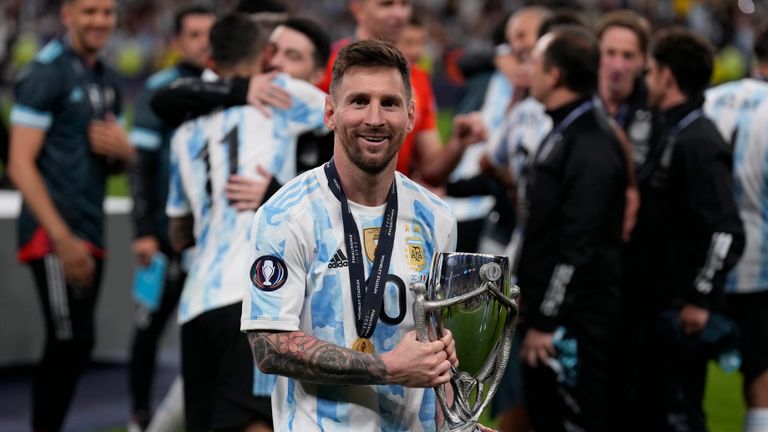 Manchester City forward Erling Haaland believes Brazil, Argentina, France and England are the favourites in Qatar; Norwegian says it would be his dream to lead his country at a World Cup in the future

Lionel Messi says Brazil, France and England are the biggest threats to his dream of finally getting a World Cup winners’ medal with Argentina.

The 35-year-old Paris Saint-Germain forward will again shoulder Argentina’s hopes in Qatar as they bid to deliver the South American country’s third world title but first since 1986.

“Whenever we talk about candidates, we always talk about the same teams,” Messi told South American Federation CONMEBOL.

“If I have to put some above others I think Brazil, France and England are a little bit above the rest. But the World Cup is so difficult and so complicated that anything can happen.”

Messi reached the final with Argentina in 2014 but suffered an extra-time defeat by Germany.

Copa America champions Argentina are unbeaten in 35 games and if this is to be Messi’s final World Cup, they are in the form to deliver the title.

“We are very excited. We have a very nice group that is very eager, but we think about going little by little,” he said.

“We hope to start the World Cup in the best way to face everything that comes after. The more you play and the more time you spend on the pitch, the more you get to know each other.”

Argentina’s opening Group C match is against Saudi Arabia before they face Mexico and Poland.

Haaland: England among favourites | ‘I wish I was playing!’

Manchester City forward Erling Haaland wishes he could be at the Qatar World Cup but because Norway failed to qualify for the tournament, the 22-year-old will use the break to recharge for the rest of the Premier League season.

Haaland has enhanced his reputation as one of Europe’s top strikers following his move to City from Borussia Dortmund in the close season, scoring 18 goals in 13 league games and five goals in four Champions League matches.

But with Norway only finishing third in Group G of European World Cup qualifying behind the Netherlands and Turkey, Haaland will have to wait to add to his international tally of 21 goals.

“I wished I played in the World Cup of course, but that’s the reality now [that] I don’t do [that], but I will relax my body and my mind a lot and then I will train,” Haaland said.

“What I will train on? Nothing special I think, it’s been going quite well my first months at City so I don’t need to do so many changes to be honest.

“It’s about preparing myself for the next half of the season and be ready when the next game kicks in after the break.”

Norway last qualified for the World Cup in 1998.

“The biggest thing we can do is to get to either a World Cup or a Euros,” Haaland said. “That of course is my goal with the national team to do. We know it’s difficult, but hopefully in the future one day I’ll be able to play there.”

Haaland said Brazil, Argentina, France and England were the favourites in Qatar, where the World Cup begins on November 20.

“I cannot only say one, because there are so many good teams, so yeah, these four,” he added.

What are Man City doing during the World Cup?

Manchester City are yet to fully finalise plans but Pep Guardiola has revealed the first-team members not heading to Qatar will take a break once the World Cup starts.

At the start of December, the squad are set to travel to Abu Dhabi for a training camp in the United Arab Emirates, where the club’s owner Sheikh Mansour is the Deputy Prime Minister.

“We will try, maybe in two, three weeks for these guys in winter in Manchester,” Guardiola said earlier this month. “Take a break, for staff to go there. Good weather, our owners are there. We are going to do that.

Guardiola also said he expects Haaland to enjoy some down time in Spain having missed out on reaching the World Cup with Norway.

“I’m pretty sure he will love to be at the World Cup and maybe the next one or Euros he will,” Guardiola said on his striker. “But he has a house in Marbella – go there, play golf, hopefully don’t drink much, eat much and come back fit.”