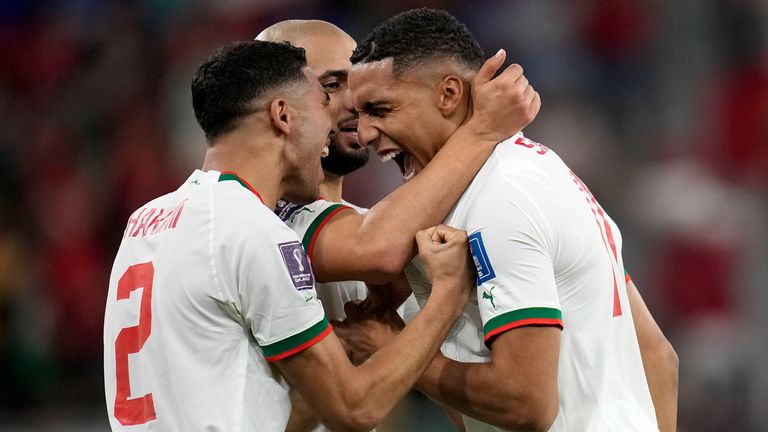 Match report as Romain Saiss broke the deadlock glancing in a clever free-kick, beating Thibaut Courtois at his near post; Zakaria Aboukhlal put the gloss on a shock victory in second-half stoppage time to send Morocco temporarily top of Group F; Roberto Martinez: “We lost our composure”

Abdelhamid Sabiri’s free-kick found the net via Saiss from an impressively tight angle in the 73rd minute, beating Thibaut Courtois at his near post, before Aboukhlal converted Hakim Ziyech’s delivery to seal a momentous win in second-half stoppage time.

The North Africans join Saudi Arabia and Japan, the conquerors of Argentina and Germany respectively, in upsetting the odds to stun opponents who, traditionally, have enjoyed long-established success on the world stage.

Belgium are by no means condemned but may now need to beat Croatia in a Group F showdown to progress to the last 16 – both of those nations were on the podium in Russia only four years ago.

Walid Regragui’s spirited side also had the ball in the net with the last kick of the first half as Ziyech’s free-kick eluded all those housed in the penalty area, catching Courtois unsighted, but a VAR review found captain Romain Saiss had strayed offside, disrupting Courtois’ eye-line.

The premise that this is a tournament beyond the reach of Martinez’s supposed ‘golden generation’, most of whom are now edging over the age of 30 and were branded “too old” by De Bruyne ahead of this game, is beginning to ring progressively more true. Afterwards, Jan Vertonghen snapped back at that sentiment, saying: “Where did it go wrong? We probably also attack badly because we are too old, that must be it now, surely?”

How Belgium’s last-16 hopes were dented

Morocco had failed to score in 53 per cent of their World Cup encounters before their meeting with the much-fancied Europeans, who had not lost a group game since 1994.

The game began in the fashion that most would have anticipated, not helped by the fact Morocco were forced into making a mystery change of goalkeeper moments before kick-off, replacing Yassine Bounou with Munir El Kajoui.

Munir, who plays his club football in Saudi Arabia, was called into action early to deny Michy Batshuayi – Belgium’s match-winner against the Canadians – as the ex-Chelsea striker collected an incisive pass from Thorgan Hazard, but did not have the guile to beat the stand-in stopper.

Morocco’s foothold in the game was far more gradual, but the majority of the Al Thumama Stadium, which was dominated by Moroccan fans, were aggrieved when Ziyech’s free-kick was chalked off by VAR – prompting a sense of injustice that carried through to the second period.

The setback certainly did not derail Morocco’s players, as Sofian Boufal and Ziyech grew in influence, before Sabiri’s right-footed free-kick was glanced past a despairing Courtois by Saiss, who unlike the Chelsea winger’s delivery 30 minutes earlier did manage to make contact.

Aboukhlal then put the gloss on an incredible triumph when he fired beyond Courtois, again at his near post, from Ziyech’s cute cut-back.

Belgium, who had scraped a 1-0 win over Canada in their opening game, again looked a pale shadow of the team who finished third in 2018 and climbed to second in the world rankings. They must now battle for a last-16 spot against Croatia on Thursday; kick-off 3pm.

Morocco, meanwhile, have four points from their opening two games and are on course to progress. They face Canada, who are currently pointless, in their final outing, also on Thursday at 3pm.

Portugal in 1986, Scotland in 1998, Belgium in 2022. It’s a short list, but no World Cup win will be remembered more fondly, or perhaps more significantly, than Morocco’s latest. Their finest moment on the international stage.

The celebrations were overstated, helped in no small part by the vociferous Moroccan fans, who turned this game into a home tie for the Atlas Lions, whistling every Belgian touch.

Morocco fed off the crowd’s endless energy and, in turn, bounded over the finish line. This was not a victory aided by luck, or marred by contentious decisions. It was merited.

You have to question Thibaut Courtois’ positioning for Romain Saiss’ opener, but take nothing away from the audacity or the execution of the strike. Besides, it was entirely deserved.

Belgium have only scored fewer goals after two games at a World Cup once before – they had scored eight goals by this stage in 2018.

Are we witnessing the disappointing end of one era in western Europe, and the start of another in northern Africa? After Saudi Arabia set the precedent last week, the Moroccans will be calling for a national holiday. Should they progress to the knockout phases in Qatar next week, they may well be granted one.

Analysis: Belgium are in trouble on and off the field

When even Kevin De Bruyne has an off-day, you know something is wrong. In the context of Belgium’s World Cup, perhaps it should not be a surprise.

The noises coming out of the camp, from the Man City midfielder, in particular, have been eyebrow-raising for all the wrong reasons. His open frustration with Jan Vertonghen’s long passing against Canada. Then an admission he and his team-mates were “too old” to win the tournament.

Against a backdrop of increasing disharmony, Belgium now need to beat Croatia in their final group game to be sure of qualifying for the last 16, four years after the Golden Generation marched past Brazil and to third place – their best World Cup – in Russia.

That they should do so having lost to a Morocco side celebrating only a third win in their World Cup history, half as many as Belgium managed in 2018 alone, is even worse.

Belgium’s body language looked concerning from the first minute against the African underdogs. They controlled possession, but never looked knew what to do with it. It would have all felt very familiar for anyone who lived through England’s years of under-performance.

Morocco had moments of quality, flashes of brilliance through Sofiane Boufal in particular but there was only one reason they won the game – they wanted it more.

Belgium’s players were sniping at each other long before Morocco’s opener, eventually credited to Romain Saiss, and the unhappy camp which they present is just as big of an issue for Roberto Martinez as their most embarrassing World Cup defeat in nearly 30 years.

Vertonghen offered a small insight into the situation inside the Red Devils squad, telling reporters: “A lot is going through my head now, things that I shouldn’t say outside the dressing room.”

That did not stop him also sarcastically biting back at De Bruyne, and questioning whether Belgium’s poor attacking play was because his team-mates were “too old”. When things start spilling out in public, you know there’s trouble brewing.

At some point, that Belgium dressing room has to turn things round to create a united front before the must-win game with Croatia on Thursday. But on current evidence, you would not bet on it.

“It’s a difficult result. The first goal affected the outcome a lot. It’s a dead ball, we couldn’t get our game going and it’s a game we need to understand.

“We need to react into the next game, that’s what happens in the World Cup. The situation at the free-kick was the way we have been defending for six years. It’s a good ball, but it’s nothing to do with our setup.

“We had good moments but couldn’t get clear chances, we had a couple of half opportunities, and if you allow the goal to be conceded it changes the game radically.

“That’s when we lost our composure, and couldn’t get ourselves in the final third more with more thought. The game got away from us after conceding the goal.”