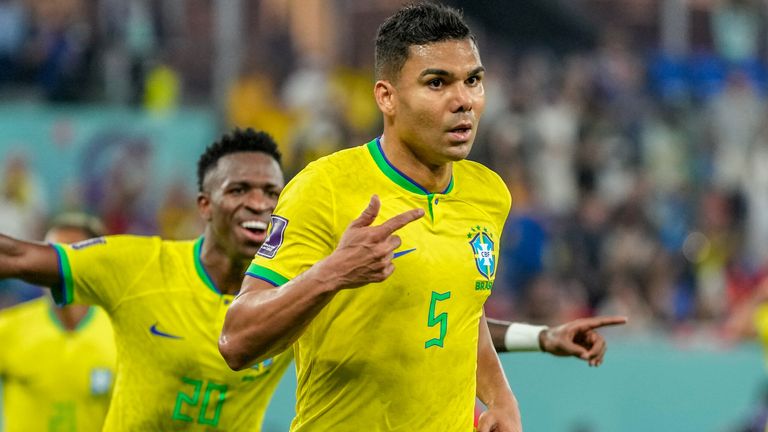 Match report as Manchester United midfielder Casemiro fires in winner for Brazil to send his country into the last 16 of the World Cup; Brazil without Neymar who injured his ankle in opening Group G win over Serbia; Switzerland remain on three points.

Casemiro celebrates after giving Brazil the lead against Switzerland

Casemiro fired Brazil into the last 16 of the World Cup with a late strike in their 1-0 win over Switzerland.

With Neymar missing the game due to an ankle injury, the five-time champions laboured for long periods of the match as they struggled to breakdown the determined defensive set up of their Group G opponents.

Vinicius Jnr had looked the most likely to make the breakthrough and saw a second-half strike ruled out by VAR with Richarlison offside earlier in the move.

But with just seven minutes of the 90 remaining, Casemiro latched onto Rodrygo’s smart flick from Vinicius’ pass inside and slammed home with the help of a glancing deflection off Manuel Akanji.

The thrilling 3-3 draw between Serbia and Cameroon earlier in the day means Brazil, with two wins from two matches, are guaranteed a top two spot, although Switzerland – sitting on three points – will need a win in their final group game with Serbia to guarantee their progress. A draw would be enough if Cameroon don’t beat Brazil.

Gary Neville on Brazil’s World Cup chances: They can win it

“Can Brazil get to the final and win the World Cup? They can. I thought Spain and Germany was the best game in the tournament by a mile on Sunday night. If Brazil were playing in that company it would raise them a level. They’re not playing against that company yet, they’re just purring along nicely.

“I think they’re in a good place. They’ve shown they can defend well but they’ve also shown they can change games and inject some urgency into it with quality off the bench.”

How Brazil finally found a way through…

Brazil coach Tite has been criticised for his conservative approach in the past and his decision to bring Fred into his side in the absence of Neymar was an interesting call and one which would have opened him up to scrutiny had his team not secured a win.

They were certainly far from their flowing best in the first half, when all they had to show for their efforts was a tame shot on target from Raphinha and a chance at the back post for Vinicius, who did not connect cleanly with the cross.

With their focus on defence, Switzerland offered little in attack at the other end and failed to land a shot on target across the 90 minutes, although Alisson provided a few nervy moments with the ball at his feet and Alex Sandro slid in to make a desperate block from Silvan Widmer’s cross when Brazil suddenly looked exposed early in the second half.

Brazil had a goal ruled out on 66 minutes when a good move involving Richarlison, and Rodrygo which allowed Vinicius to capitalise on the space he had out wide on the left, skipping away from Nico Elvedi to tuck his finish into the bottom corner, was cancelled because of an offside.

As the clock ticked away, Tite cut a more and more frustrated figure on the touchline, having thrown on attack-minded Rodrygo, Bruno Guimaraes, Gabriel Jesus and Antony.

Defensive midfielder Casemiro was the unlikely match winner, though, hammering home just his sixth goal in 67 international appearances after a sudden burst of speed and skill from Vinicius and Rodrygo, and sending the Brazil supporters inside the Stadium 974 into celebration mode.

Late chances came and went for those two attackers but in the end the one goal was all Brazil needed. It wasn’t pretty but it got the job done.

Neville: Tite’s changes made the difference

Gary Neville on ITV: “Tite would have come in for a lot of criticism. He makes a change at half-time so he recognises it straight away. For me, the intent all the way through from the senior players, whether it be Thiago Silva pressing up the pitch, whether it’s Casemiro – the holding midfield player in the box, furthest forwards – every change the Brazil coach made in that game told his players ‘we’ve got to win this match’.

“Rodrygo, Antony, Jesus, Guimaraes are on. Fred is off, Lucas Paqueta is off. All the pragmatic behaviour in the first half goes out of the window because the expectation is they have to win the game.

“And they’re now in a brilliant position where they’ve not only [qualified] but all those talented players, we could see them in the third game. He can experiment, all his squad players can get a touch of the ball.

“They were a little bit too conservative for large parts of the game but the coach got it right in the end by making the changes and interfering with that match positively. He didn’t have enough [of his attackers] on the pitch at the start of the game but towards the end it looked the right type of balance for the quality they have.”

Is Casemiro the best midfielder in the world? Neymar thinks so…

After Brazil’s win, Neymar tweeted: “Casemiro has been the best midfielder in the world for a long time”.

Asked about that statement, Tite said in his post-match press conference: “I always respect other opinions and I usually don’t comment on them, but I’ll allow myself to do so today – I agree!”

As well as the winner, Casemiro made a game-high five interceptions – more than twice as many as any other player on the pitch.