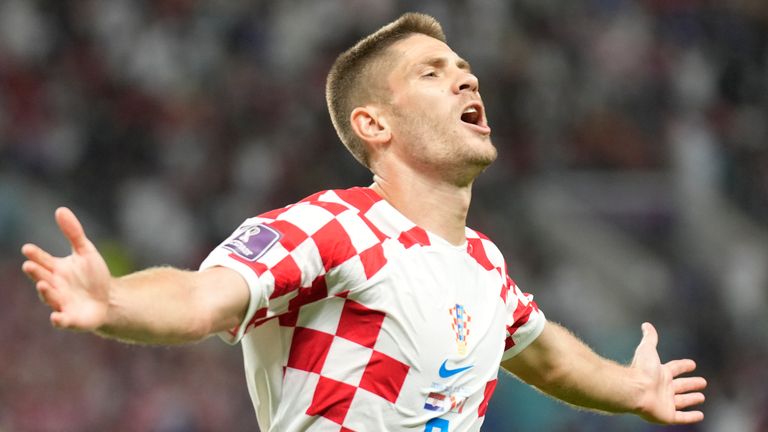 Croatia came from behind to knock Canada out of the World Cup with a 4-1 victory in their Group F clash.

Alphonso Davies opened the scoring for Canada after just two minutes – with their first-ever World Cup goal at the fifth attempt – but two goals from Andrej Kramaric either side of a Marko Livaja effort turned the game on its head. Substitute Lovro Majer then added a late fourth.

It left Canada pointless and heading home already ahead of their final group game against Morocco, with their first venture in the tournament since the 1986 edition in Mexico being brought to a premature end.

For Croatia, the win kept them top of the group. A point in their final game against Belgium on Thursday will be enough to see them progress.

Croatia come to life as Canada crash out

Canada’s big moment finally came after two minutes. Davies had seen a penalty saved in their opening defeat against Belgium, but he wasn’t to be denied again as he rose in the box to power home a header from Tajon Buchanan’s cross – notching the fastest goal of the World Cup so far.

There were question marks over Croatia’s energy levels after their draw against Morocco, but they showed all their experience to turn the game around before the break.

First it was Kramaric on 37 minutes, who latched onto a smart reverse pass from Ivan Perisic before finding the far corner from a tight angle. Then it was Livaja just before the break, as he picked up a pass from Josip Juranovic before driving a low pinpoint finish inside the near post from the edge of the box.

On 70 minutes, Kramaric scored again to put the result beyond doubt, bringing down a cross from Perisic with a fine touch, before sending a low effort into the bottom corner.

And in stoppage-time the icing was added firmly to the cake for Croatia as a mistake from Kamal Miller allowed Mislav Orsic a free run on goal, before he squared for Majer to roll the ball into an empty net.

Player of the match – Mateo Kovacic

Kramaric will take the headlines for his brace yet it was Mateo Kovacic’s energy and endeavour that dragged Croatia back into this game. Early on it looked as if they wouldn’t be able to live with the legs of Canada, but his ball-winning efforts and driving runs turned the game in his side’s favour.

Outshone for so long for his country in a midfield alongside Luka Modric and the now-retired Ivan Rakitic, it was a superb display.

The result puts Croatia top of Group F on goal difference ahead of Morocco, who beat Belgium 2-0 earlier in the day. Both of those sides are on four points, with Belgium on three.

Canada are bottom of the group without a point and cannot progress.

Dalic says Herdman must ‘learn some things’ after avoiding handshake

“He wasn’t there and that’s his way of doing things. He’s obviously mad. He is a good coach, he is a high-quality professional, but it will take some time for him to learn some things.

“We will not calculate, we will not make any other plans. This is going to be a difficult match.

“We have to get some rest, we have to prepare, we have to repeat what we presented here today, good football, rapid, fast football, a disciplined approach.”

Herdman: ‘We showed we can compete’

“I think we showed in that first 25 minutes that little old Canada can compete with the best in the world. We showed we can compete.

“We’ve got a big game coming up against Morocco, a huge game for Canada in the sense that there is a whole lot for us to play for. We came here to make history, first game they said they wanted to show they were fearless and they did that.

“The second game they said they wanted to score goals, if those goals were enough to win a match that would have been us with three points but it wasn’t. This last game is about getting a result and winning for Canada.”

Canada’s first World Cup for 36 years ended prematurely, but the performances of John Herdman’s team in Qatar will provide hope they will not have to wait over a quarter-of-a-century for the next.

They were very narrowly beaten by Belgium in their Group F opener earlier in the week and that prompted a confident start against Croatia, which resulted in them taking a shock lead with just two minutes on the clock.

It was their first ever goal at a World Cup finals and there was little surprise that starboy Alphonso Davies was the player that scored it.

Croatia – finalists in 2018, of course – looked nervy early on, but grew as the minutes ticked by and, in the end, proved to be too strong, too experienced and too big a barrier for the side ranked 41st in the world before a ball was kicked.

Herdman had been bullish before the encounter, suggesting his side would “F’ Croatia”, which seemingly provided fuel for the Europeans. Two-goal Andrej Kramaric batted back after the final whistle: “In the end, Croatia demonstrated who F’d whom.”

There is perhaps a lesson to be taken about choosing battles wisely, which Herdman and Canada will no doubt learn from as they look to remain players on the world stage.