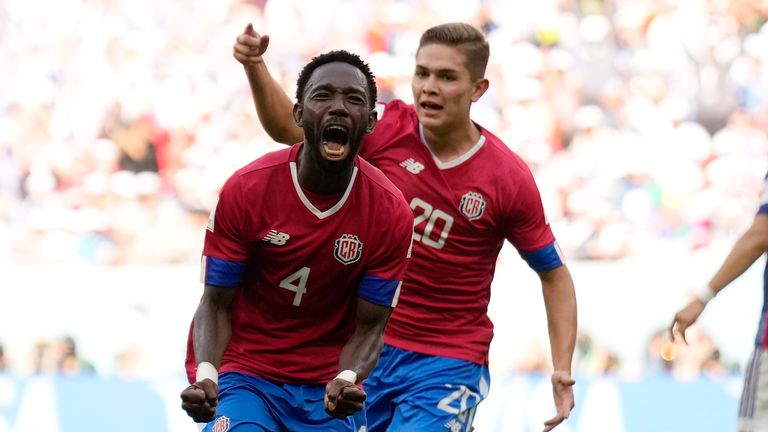 Match report from the 2022 World Cup Group E clash between Japan and Costa Rica at the Ahmad bin Ali Stadium as Keysher Fuller scored inside the final 10 minutes to secure a shock win for Los Ticos, who prioritised defensive solidity in their second match of the tournament

Costa Rica ignited their World Cup campaign with a smash-and-grab 1-0 win over Japan at the Ahmad bin Ali Stadium.

Luis Fernando Suarez’s men prioritised defensive solidity after their 7-0 humbling at the hands of Spain in their opening match and kept their opponents at bay sufficiently throughout, as the early-afternoon temperature exceeded 30 degrees.

But Costa Rica made Japan pay for their failure to capitalise on their attacking superiority when Keysher Fuller curled a shot over Shuichi Gonda (81) with the team’s first shot on target in the tournament.

The late winner blew Group E wide open, with Costa Rica, Japan and Spain – who face Germany later this evening – all on three points at this stage.

How Los Ticos triumphed against the odds

Japan looked buoyant after their shock win over Germany last time out and flew out of the blocks in an attempt to put Costa Rica immediately on the back foot. They were soon controlling the tempo of the game.

Japan’s Ritsu Doan sent a teasing ball across the box from the right, which needed just one touch to find the back of the net, while at the other end, ex-Arsenal forward Joel Campbell’s improvised shot cleared the crossbar by a good few feet.

Player of the match: Keysher Fuller

Given the lack of attacking endeavour, the organisation of the Costa Rican defence – marshalled by Kendall Waston – was perhaps the highlight of a poor first half.

Hajime Moriyasu changed the shape of his side at the break, moving to a back three in an attempt to promote creativity and it worked initially, with half-time sub Takuma Asano forcing a save with his first touch.

The Japanese once again began to dominate, but the Sunday League-like feel of the game could not be shaken. Their passing grew less accurate, while crosses and long balls were often wildly overcooked and wasted.

And then came the decisive moment. Hidemasa Morita gave the ball away cheaply, with Yeltsin Tejeda setting up Fuller to curl over Gonda. The ‘keeper was positioned well off his line and, even though he got fingertips to the shot, he could not stop it looping into the net.

Keylor Navas then made two saves of his own in the dying embers, first from Daichi Kamada and then Asano, but fortune was not on Japan’s side.

Player of the match – Keysher Fuller

“Losing 7-0 is humiliating. The only way you can respond to that is to put in a performance. They did the basic things well. It’s not always about being pretty and doing things with style.

“It’s about getting the job done and they’ve kept a clean sheet. They’ve taken their one moment and that’s tournament football.”

“‘You have to be at your strongest when you are feeling at your weakest.’

“It’s a quote better suited to – and no doubt aimed at – the trials and tribulations of the real world, but it seems Costa Rica took that on board after they were thrashed by Spain on Thursday.

“As such, Los Ticos set up with defence at the forefront of their minds on Sunday. With the pace Japan attacked at times, it was almost as though they were resigned to their fate and saving face for the remainder of their stay in the tournament would be more important.

“But even after their win over Germany, the Japanese could never generate the fluency needed and, as the second half wore on, it looked as though a mistake would settle the game – in either team’s favour. That was exactly what happened. Hidemasa Morita made a hash of his clearance, Costa Rica pounced and the points were theirs.

“A draw would have all-but sealed their fate, but Keysher Fuller’s moment of magic not only kept them very much in the tournament, but provided added inspiration that they could even qualify for the round-of-16. Who would have guessed that would be the case earlier this week?

“Costa Rica may not have been at their best and it may not have been the most convincing win – by any stretch of the imagination – but they way they dug deep to triumph in the face of adversity should offer inspiration for others.”