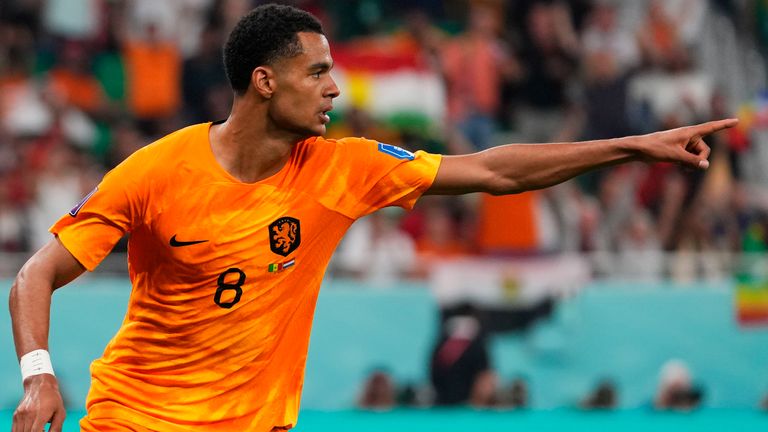 Match report as late Cody Gakpo and Davy Klaassen goals give Netherlands victory against Senegal in their Group A encounter at the Al Thumama Stadium; Ecuador beat host nation Qatar 2-0 in the other Group A game on the opening night of the 2022 World Cup

Late goals from Cody Gakpo and Davy Klaassen gave Netherlands victory against Senegal in their opening Group A match of the 2022 World Cup.

Gakpo made a perfectly timed run to head home a beautifully weighted cross from Frenkie de Jong, before Klaassen tapped home to seal the win deep into injury time.

The Dutch are now undefeated in 16 matches under coach Louis van Gaal. They also stretched an unbeaten record in their opening game at World Cups that dates back to 1938.

Man of the match: Cody Gakpo

How the Dutch defeated dogged Senegal

Gakpo, who has now scored three goals in his last four internationals, had their first opportunity after four minutes but tried to square the ball to Steven Bergwijn instead of going for goal.

That was followed by a Daley Blind header at the far post that flew wide before Steven Berghuis sent Bergwijn through and he laid it off for the unmarked De Jong in the box.

The midfielder took far too long to release the ball, however, and his effort was blocked.

The African champions were badly missing injured talisman Sadio Mane and did not manage a shot on target until the 65th minute when Boulaye Dia’s tried to sneak one past goalkeeper Andries Noppert, making his Dutch debut, from a tight angle.

Senegal had more possession in the second half but despite the relentless drumming from their small fan group in the stands could not find the back of the net.

To make matters worse, Cheikhou Kouyate had to be taken off injured before Gakpo snuck in to snatch the opening goal.

Klaassen made sure of the three points with a stoppage time tap-in after Mendy palmed a Memphis Depay shot into his path.

The 2022/23 season has been one to forget for Edouard Mendy so far but he would have had hopes that travelling to the World Cup with Senegal could have marked a turning point.

Away from his troubles with Chelsea, the goalkeeper arrived in Qatar as the No 1 for the African champions, who were tipped by many to make the knockout stages before the tournament kicked off.

But instead, the mistakes that have hindered Mendy’s campaign at club level appear to have followed him to the World Cup, with the 30-year-old offering a helping hand for both the Netherlands’ goals.

Aliou Cisse’s side matched their European counterparts for 84 minutes, until Mendy rushed from his line to meet Frenkie de Jong’s fine left-wing cross but was beaten to it by Cody Gakpo, who timed his run and header to perfection.

If there was doubt over whether Mendy was at fault for the opener, there was no debating the second as the ‘keeper palmed Memphis Depay’s tame shot straight into the path of Davy Klaassen, who slotted in the second in stoppage time to seal the Netherlands’ win.

Previously an impressive figure between the sticks for Chelsea, Mendy has seemed to be gripped by nerves since the summer and was replaced as the Blues’ first-choice stopper after gaffes against Leeds and West Ham.

Those nerves reared their head again in the Al Thumama Stadium as Senegal fell to defeat in their opening World Cup game – a result that realistically means they must beat Qatar on Friday to salvage their hopes of reaching the last 16.

Gakpo arrives on the big stage

Cody Gakpo started to make headlines in England when he emerged as a target for Manchester United, Leeds and Southampton in the summer transfer window after impressing for PSV.

The 23-year-old revealed talks were held with Man Utd, but they eventually signed Antony while Gakpo remained in Eindhoven – a decision that appears to be paying dividends for the Dutchman.

Gakpo is top for both goals and assists in the Eredivisie this season, meaning clubs of a higher calibre than Leeds and Southampton are likely to come calling when the window reopens in January.

The forward’s match-winning display for the Netherlands against Senegal will do nothing to dampen the enthusiasm from interested clubs.

With Van Gaal’s side seemingly meandering to a draw, Gakpo seized the moment, ghosting in ahead of Mendy to nod his side into a late lead with their first shot on target of the game.

It’s those attacking instincts that have seen him rise to the top of the goalscoring charts in his homeland, while the three chances he created – more than any of his team-mates – showed why Van Gaal deployed him in the No 10 role.

Also capable of playing on the wing or as a striker, Gakpo could prove to be a crucial weapon for the Netherlands at the World Cup – a scenario that will only serve to raise his value ahead of the inevitable battle for his signature.

What the managers said…

Senegal manager Aliou Cisse: “We are disappointed to have not scored, we had two or three very good chances. We needed to be more effective in front of goal.

“Ismaila (Sarr) and Krepin (Diatta) are responsible there, but of course, the absence of (Sadio) Mane is a problem for us… Our attackers are good and we know what they are capable of.

“It was a challenging game… We need to work on it [scoring goals] with Ismaila and the others. We expect a lot from him and Krepin.”

What the result means

Ecuador and Netherlands are now joint leaders in Group A after both registering 2-0 wins in their respective openers.

With the transfer window opening in just over a month, Cody Gakpo and Frenkie de Jong – two players who were linked with Premier League moves in the summer – stole the show as the Netherlands eventually saw off Senegal.

De Jong’s glorious assist set up Gakpo for the winning goal as both players did themselves no harm if they want to pursue a move in January.

Elsewhere, Chelsea’s Edouard Mendy struggled for Senegal, while his Blues team-mate Kalidou Koulibaly did little to stand out from the crowd.

Nottingham Forest’s Cheikhou Kouyate, Everton’s Idrissa Gana Gueye and Leicester’s Nampalys Mendy were workmanlike in midfield for the African side, but Watford’s Ismaila Sarr – currently playing in the Championship – was his side’s best attacker.