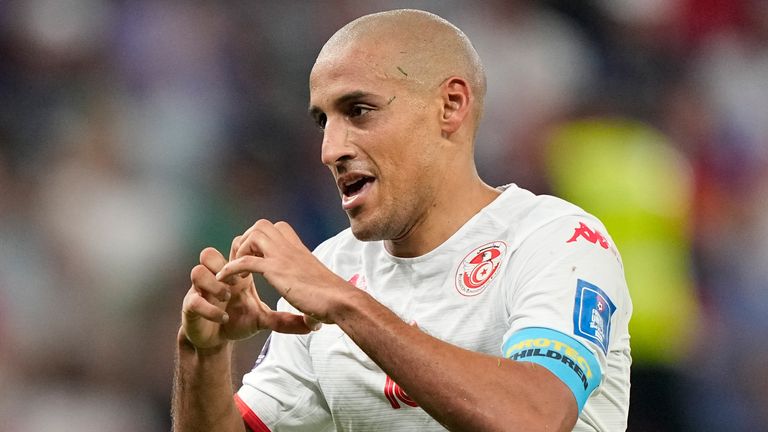 Match report as France flatter to deceive and are beaten by Whabi Khazri goal; Tunisia finish on four points but third behind Australia, who beat Denmark to finish second; France qualify as group winners and had Antoine Griezmann’s goal ruled out in injury-time

Tunisia beat Group D winners France 1-0 but it wasn’t enough to qualify in a dramatic finale that saw Antoine Griezmann’s goal ruled out by a late VAR review.

Wahbi Khazri scored the decisive goal on 58 minutes with a fantastic solo run as Tunisia took full advantage of Didier Deschamps making nine changes to his France side and resting Kylian Mbappe.

France only started to put pressure on in the latter stages when Mbappe was substituted on and they thought they had levelled it up when Griezmann fired home but an eventual VAR review spotted he was offside in the build-up.

With Australia beating Denmark to finish on six points, it meant Tunisia, who finished third, crashed out in strange fashion having taken four points off France and Denmark.

France are set to play the runners-up in Group C on Sunday at 3pm with a potential meeting with England in the quarter-finals if they win their last-16 game.

When changing an entire team it’s hoped players given their chance make their mark, however, France lost all their early momentum from the tournament in a drab opening to the game.

Man of the match: Whabi Khazri

Tunisia sensed their opportunity and played with a verve and energy that their status of ‘win or bust’ encouraged them to.

Khazri’s wicked delivery almost led to a goal inside seven minutes when it was turned home in emphatic style by defender Nader Ghandri but the linesman’s flag denied him a momentous World Cup goal.

Khazri latched onto a glorious ball through just before the break but no team-mates were on hand to convert at the back post from a wonderful cross.

Tunisia remained in the ascendancy after the break.

Youssouf Fofana’s weak defensive shielding and claims for a foul weren’t bought by the referee but Aissa Laidouni fired over the bar from a tight angle. Fofana didn’t heed that warning of soft contact not being punished by the referee as he was at it again moments later – this time Tunisia made France pay.

Fofana was this time robbed by Khazri in midfield and stopped, hoping the referee would blow for the foul. There was no whistle and Khazri showed remarkable composure to saunter through on goal and slide a finish into the far corner.

Following the goal, Deschamps called for his big guns with Mbappe unleashed and it allowed France a platform into the game as Tunisia shut up shop in defence.

With the clock ticking towards the ninth minute of added-on time, Griezmann looked like he’d broken Tunisian hearts by firing in a loose ball in the box. However, a VAR review was eventually triggered and the referee was ordered to the pitchside screen to review Griezmann being two yards offside from the original ball.

The goal was chalked off so Tunisia had their famous World Cup win – but cruelly crashed out of the tournament.

Player of the match – Wahbi Khazri

It was a goal that deserved more than what Tunisia eventually got. Such was the beauty of it, Khazri and his team-mates can feel very unfortunate to be heading on the next flight out of Qatar. His goal capped an energetic performance that set the tone for his side. He backed up that vibrancy with quality – as shown by the winning goal.

When Griezmann’s 98th-minute equaliser was ruled out after the latest of VAR calls at the Education City Stadium, there were a swell of mixed emotions for Tunisia.

It was a bittersweet moment.

The North African nation had, at the fifth attempt, registered their first ever win against France – the reigning world champions – and deservedly so. But it also did not matter one bit in the context of the 2022 World Cup.

Jalel Kadri’s men did as much as they could on the day, but progression to the last 16 was dependent on Australia failing to beat Denmark in the other Group D clash. Matthew Leckie’s strike ensured that would not be the case.

Truthfully, had they been more potent in attack in their previous two matches, Tunisia might not have found themselves in such a precarious position. They defended admirably against Denmark, yet had just one shot on target, and lost out to Australia by a single goal in a game they, arguably, had the better of.

They got nearly everything right against France and even kept just their third clean sheet in World Cup history. Perhaps they had a spring in their step when they discovered Didier Deschamps made an incredible nine changes to the team that beat the Danes on Saturday.

Drama in the dying embers almost robbed them of a famous win, but though they did eventually get it, it was not enough to see them crash out at the group stage for the sixth time in six appearances on the world stage.