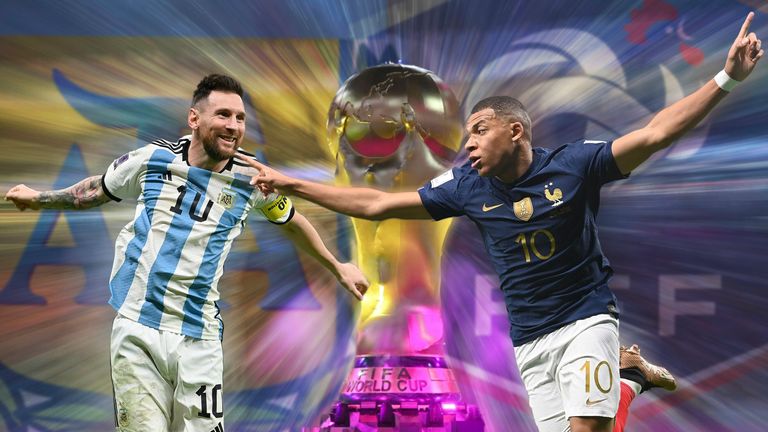 The World Cup reaches a thrilling crescendo on Sunday with Argentina and France battling it out for the greatest prize in football. But when history looks back on Qatar 2022, who and what will this tournament be remembered for?

Who is the player of the tournament, the best young player and the greatest managerial performance? Who disappointed and failed to meet expectations? Read on as Sky Sports pundit Gary Neville delivers his 2022 World Cup verdict…

Player of the tournament

I’m going to go with Lionel Messi. It’s between Kylian Mbappe and Messi, but I’m going with Messi because Mbappe is in a far better team.

Mbappe has got some great players around him whereas the players around Messi are of a good standard but not at the same level. Messi is nothing like the player he was 10 years ago obviously because of his age, but he’s just delivering in one or two moments, unbelievable moments with an assist, a goal.

The rest of the Argentina players are supporting Messi in an incredible way with tenacity and spirit. I suspect whoever wins on Sunday will be crowned player of the tournament.

Young player of the tournament

Jude Bellingham for England. In terms of quality performances, Gavi and Pedri for Spain were as good as I have seen in this tournament, but they lacked that cutting edge, killer instinct and ruthlessness to win knockout matches.

I’m going to go with Julian Alvarez, who has been outstanding for Argentina. His performance in a World Cup semi-final against Croatia, who are a fantastic team, was brilliant.

Alvarez has become really important to Messi. When Messi was playing with Lautaro Martinez earlier in the tournament it wasn’t really happening for him, but Alvarez has emerged in the last few games and his work in and around Messi is noticeable. He’s a bright spark, he’s on the same wavelength as Messi.

It’s got to be the Morocco manager. Walid Regragui is the manager of the tournament.

Obviously, he’s only come in and had eight games with the team. The performance against France was outstanding. To think they came out for the second half with three of the defensive players they named in the starting XI not on the pitch and were still in the game with the world champions, playing like they were, was absolutely breathtaking.

There was massive disappointment for Germany going out in group stages and for Brazil getting knocked out in the quarter-finals like they were. With the players they have, they should have got over the line.

But I’m going to go with Belgium, they were the team I was most disappointed with. The manner in which they were eliminated, the communications coming out of the camp didn’t feel right.

I think Belgium fell out of love with each other, having grown old together things got a bit stale and sometimes things need breaking up. Things you would never expect were coming out of the camp, saying they were past their best the day before games. Imagine how that made the other players in the group feel.

You knew once Belgium started talking like that it was going to be very difficult for Roberto Martinez to be able to get them into a good space.

I think Cristiano Ronaldo will feel he has underachieved after the way Portugal went out. Argentina as a group have come around Messi and played to his strengths, I thought Fernando Santos and Portugal would have done the same with Ronaldo. It just feels like something happened in the tournament which led to those plans being changed.

Once you leave Ronaldo out it becomes a global story. I felt sorry for Cristiano walking down the tunnel at the end in tears. That’s never a good image because you know he knows he is never going to play in this tournament again.

I wouldn’t class it as an underachievement from Cristiano, it’s an overachievement for him to be doing what he’s doing at 37 years of age. It’s just the way it ended with him being out of the team, and how disappointing and poor Portugal were as a group chasing the game against Morocco.