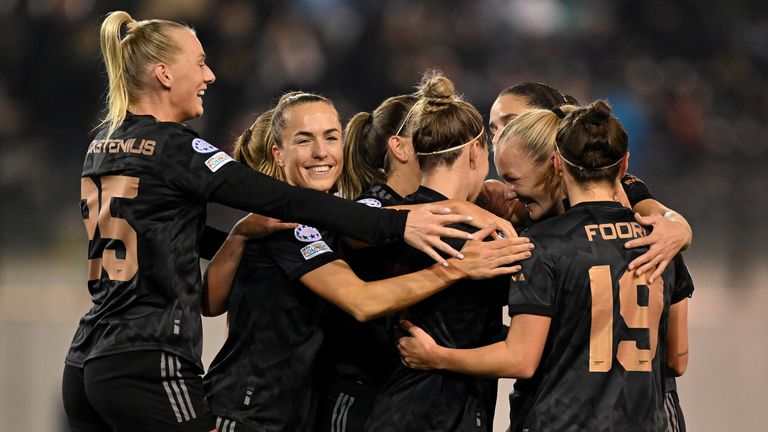 Match report as Frida Maanum scored a hat-trick and picked up an assist; Stina Blackstenius and Caitlin Foord both netted twice and assisted; Kim Little also scored from the penalty spot on her return to action; Mana Iwabuchi added late ninth goal

Arsenal topped their Champions League group in style on Wednesday, beating Zurich 9-1 as Frida Maanum – who scored a hat-trick – Stina Blackstenius and Caitlin Foord starred for the Gunners.

The pressure was on Jonas Eidevall’s side heading into the final game of Group C, needing a victory to guarantee first place as Lyon and Juventus scrapped it out for the other place in the quarter-finals.

But Arsenal ultimately wrapped up top spot in the opening 32 minutes in what was one of their performances of the season so far. Maanum (18) began the glut with a free-kick – the Gunners’ 150th goal under Eidevall – before Foord (23) added her first of two goals five minutes later.

Maanum (32) and Blackstenius (45+1) both tapped home before the break as Arsenal cruised into a 4-0 first-half lead.

But if anyone was expecting a quieter second half, they were sorely mistaken as Maanum (51) and Blackstenius (54) both scored again 10 minutes after the break. The forwards rifled home sensational efforts in quick succession, with 23-year-old Maanum completing her hat-trick in the process as her breakout season continues.

Perhaps the one mark on Arsenal’s card was missing out on a clean sheet. Zurich captain Fabienne Humm scored a fine penalty in the 64th minute after Leah Williamson was penalised for a challenge on Seraina Piubel.

However, it did not take long for Arsenal to restore their six-goal advantage. It was a gift of a goal for Foord (68) as she easily slotted home after collecting Oliwia Wos’ poor back pass mere minutes after the Zurich defender had come on as a substitute.

Wos saw her evening go from bad to worse as she was penalised for handball soon after. Arsenal captain Kim Little (71) stepped up on her return from injury, expertly dispatching past goalkeeper Lourdes Romero.

But despite being 8-1 ahead, there was more to come from the Gunners. Some lovely play between Lina Hurtig and Foord saw the Australian set up Mana Iwabuchi (83), who fired home on the angle to complete Arsenal’s rout.

It was not the farewell Zurich manager Inka Grings would have been expecting as she prepares to take over as Switzerland manager in the New Year. However, for Arsenal, it was job done in the Champions League as they signed off 2022 in style.

How Arsenal bulldozed their way to top spot

Arsenal were dominant from the off, scoring their first goal in the 18th minute with a stunning free-kick from Maanum. Won by Foord, her team-mate floated a sumptuous effort over the wall and into the top corner.

It did not take long for Arsenal to add another. Blackstenius drove down the right wing, squaring it for Foord in the middle. It was then a simple stroke home from the forward.

Maanum continued to shine for Arsenal and – shortly after sending a second direct free-kick pinging off the crossbar – added her second of the evening. It was a superb break from the visitors, with Foord driving through the attacking half before slotting the ball into Maanum. The 23-year-old then fired past Romero, taking a nick off the goalkeeper on the way through.

The Norway international turned provider with one of the final plays of the game as Arsenal went 4-0 ahead. Similarly to the previous three goals, Maanum powered down the left wing before picking out Blackstenius inside the area. It was then an easy finish into an almost open net for the forward, who scored for the first time in seven games across all competitions.

Maanum completed her hat-trick shortly after the break. She was expertly picked out by Noelle Martiz around 20-yards out before sending a powerful, curling strike past the goalkeeper. She ultimately had a direct impact in four of Arsenal’s goals on Wednesday evening.

Arsenal’s sixth goal followed soon after as Blackstenius matched her team-mate with an equally as impressive strike. The Sweden forward was found at the top right corner, given far too much space to turn before sending a thunderous effort into the back of the net.

Although Zurich were never in danger of making a comeback, they did deny Arsenal a clean sheet. Williamson’s sliding challenge caught Piubel inside the area, as the referee pointed to the spot.

It was a brilliant penalty from Humm and the hosts rightly celebrated only their second goal of the Champions League campaign – the other also against Arsenal in the reverse fixture at the Emirates.

Immediately after the penalty, Wos was introduced to bring a bit more defensive solidity to Zurich – but ultimately gave away two goals in her first five minutes on the pitch. The first saw Foord latch onto Wos’ poor attempted back pass, driving into the space before sliding the ball past Romero.

Then, the Zurich defender was penalised for handling Steph Catley’s cross from the left. Although there was slight confusion over whether it was a penalty or not, Little was soon lining the ball up on the spot before hammering it into the bottom corner.

Foord picked up her second assist of the evening – and her fourth direct goal involvement – as Iwabuchi racked up Arsenal’s ninth goal. She played the Japan international in down the right of the area before she finished superbly past Romero, rounding off a sensational evening for the Gunners.